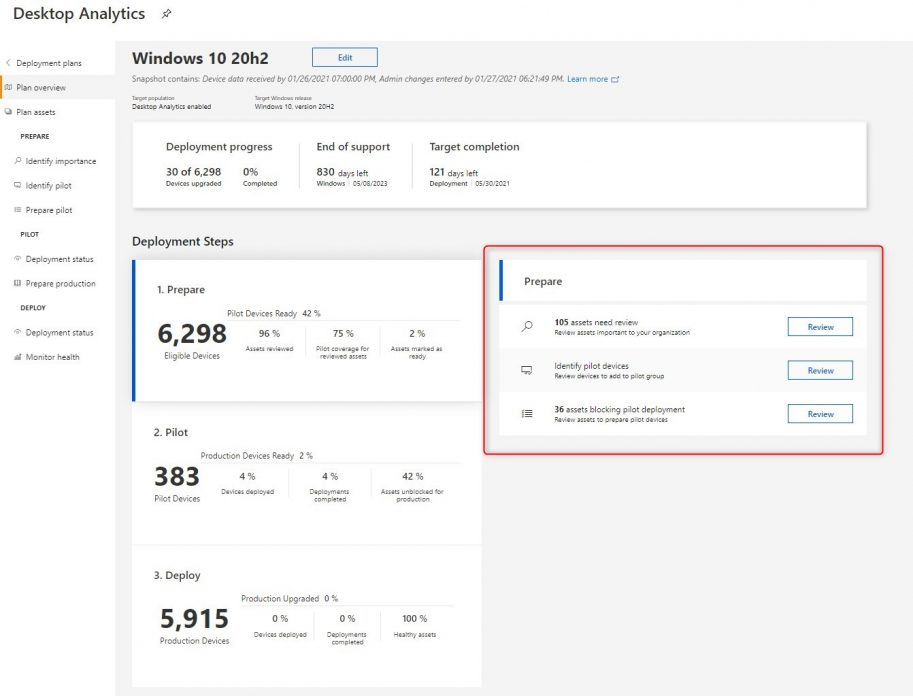 In this blog post, we’ll detail real-world scenarios on how to use Desktop Analytics information to help during a Windows 10 Feature update deployment.

See our previous post on how to setup Desktop Analytics and connect it to your SCCM/ConfigMgr/MEMCM environment prior to reading this post.

Select devices to be evaluated by Desktop Analytics

Here are a few questions to help determine which devices should be included.

This is important to simply the amount of information in Desktop Analytics. Importing Windows 7 devices will likely bring a ton of no longer used applications that will simply create additional work to sort.

Servers should also be excluded from the collection to define devices to include in Desktop Analytics.

Once the collection is built on your criteria, it can be specified under :

If you already added a collection here, but would like to review it, it can be modified. Note that it will take about 2 days to process those changes and reflect the new list of devices.

For our test, we will use the Windows 10 20H2 version. A deployment plan will :

The deployment plan can only be targeted per Windows 10 build.

This is a 2 steps classifications:

Unfortunately, any modification to an application isn’t processed live. It usually takes 24h. The sorts will not filter any progress until then.

Note as well that the count displayed is for the App version, meaning that if you flag one application as critical, without being specific about the first, the count may be higher if multiple versions are in the field.

The first way to identify pilot devices is to define a specific collection from ConfigMgr that will be targeted as Global Pilot.

Global pilot means that devices under this collection will be part of the pilot of any Deployment plans.

These could be test/lab devices for early testing and later in the process for IT users as the first few live devices.

Depending on the size of the company, and maturity of pilot testing, SME and some power users should also be included here to ensure the testing of applications compatibility

In the same fashion to implement, it is possible to define an Exclude collection. If there are known devices that should never fall under pilot, this is the solution for it. The collection requirement is the same, and the exclude can be defined in the Global pilot section of Desktop Analitycs.

On top of devices that were identified as pilots, Desktop Analytics provides insight to add devices to the pilot in order to reach 100% coverage across applications and hardware types. This can be seen under a Deployment Plans/Identify Pilot.

The number of devices as recommended will evolve following the mandatory pilot you defined as many applications and hardware will be included by those.

When you wish to add recommended devices, select specific devices or click the Add all to pilot

Once Pilots are defined and synced back to the ConfigMgr collection, it’s time to prepare the pilot.

In this section, the information displayed is applications, drivers, and safeguards that have a High compatibility risk rating.

In all cases, those prevent devices to show up under valid Pilot devices as well as Production. Each needs to be assessed the Upgrade decision.

Upgrade decision isn’t affecting Pilot devices to be eligible to receive the feature update. After all, Pilot devices is to actually test application compatibility in a more operation oriented approach instead of managing this as a complete project.

At this point, pilot devices are beginning to receive the Windows 10 Feature Update. It’s time to assign an Upgrade decision in order to prepare for the production release of the Feature Update.

While reviewing the importance and readiness of applications, always review the Compatibility risk assigned by Microsoft.

This is really important since some applications flagged as Compatibility High, are in fact Safeguard(hard blocks) that will prevent Windows 10 Feature Update to run because of know critical impact on devices.

In the example above, there is an “application” called simply Safeguard. Hard to tell what is wrong here. 2 below, an application called SQL Setup on 20h2. Somewhat clear that it’s related to SQL being installed on a Windows 10 devices, but this is in fact a Safeguard from Microsoft.

To identify such a Safeguard, a look is required in the AppRaiser database. This is a topic in itself well covered by Adam Gross’ blog post.

Along with the pre-pilot experience and with reports from the pilots, Critical and Important applications are to be reviewed to assign a decision for the Windows 10 Feature Update readiness. This needs to be achieved under the Deployment Plans. Note that future Deployment plans will require this step as well.

This also emphasize the importance of one deployment plan per Windows 10 release. Having multiple one for the same build will duplicate unnecessary work.

Making such decisions will have a direct impact on many devices’ readiness. A soon as a device doesn’t have any of, Safeguard, Critical or important application not ready for upgrade, it will be considered ready for Production.

Devices will then show up in ConfigMgr collections for the Deployment plan Production.

Like stated before, this list will be generated automatically following upgrade decisions for critical and important application, along with no safeguard from Microsoft.

From this point on, many strategies can be achieved to deploy the Feature Update. Either you use a Task sequence or the Servicing method, the assistance from Desktop Analytics will most likely ease your deployment and spare some testing time that was required before that.

The collections generated and managed by Desktop Analytics are in no way required to have the Feature Update deployed to them.

You can easily build a subset of collections to adopt a rollout strategy that fits your environment. Desktop Analytics will offer a pre-screening of the devices to give them a stamp of ready to go or not… from that point, use this information as you wish!

Desktop Analytics can also help with reporting once Feature Updates are happening.

I really hope this shed some lights on how Desktop Analytics can help rolling Feature Updates in your environment.