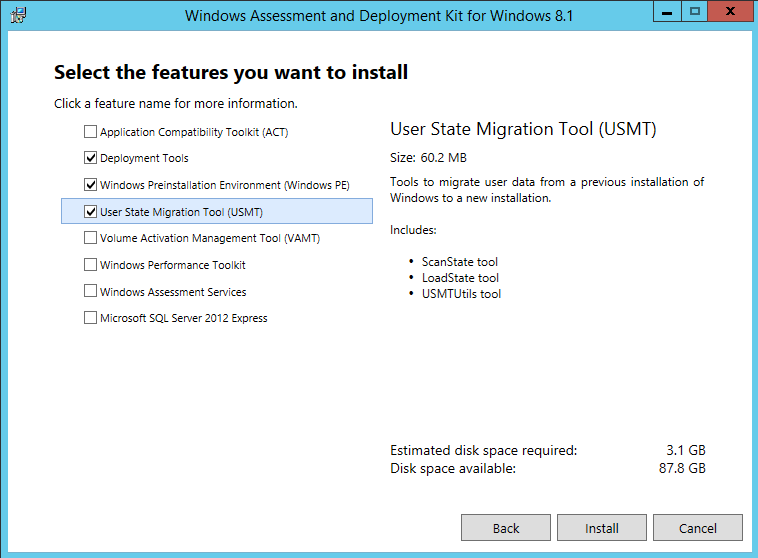 In the first part of SCCM 2012 and SCCM 1511 blog series, we will cover SCCM installation prerequisites most specifically hardware requirements, design recommendations and server prerequisites.

Another issue to consider when determining hardware requirements for a site servers is the total amount of data that will be stored in the database. To estimate the required database size for a single site, an approximate figure of 5Mb to 10Mb per client is typically used.

In our setup, we will install a single Primary Site that has the role of  Management Point, Reporting Point, Distribution Point, PXE Service Point, State Migration Point, Fallback Status Point and Software Update Point. SQL Reporting Services will be used to provide consolidated reporting for the hierarchy. This role will also be installed on the SCCM Server. Running reports can have an impact on server CPU and memory utilization, particularly if large poorly structured queries are executed as part of the report generation.

We strongly recommend that you understand SQL Server before installing SCCM. Talk and have a good relation with your DBA if you have one in your organisation.

Here’s our recommended reading  about SQL :

For this post,  our servers runs Windows 2012 R2 with latest security patches

Disks IOs is the most important aspect of SCCM performance. We recommend to configure the disks following SQL Best practice. Split the load on different drive. When formatting SQL drives, the cluster size (block size) in NTFS must be 64KB instead of the default 4K. See the previous recommended reading to achieve this.

Once your hardware is carefully planned, we can now prepare our environment and server before SCCM Installation.

You need to extend the Active Directory Schema only if you didn’t have a previous installation of SCCM in your domain. If you have SCCM 2007 already installed and planing a migration, skip this step. Configuration Manager does not automatically create the System Management container in Active Directory Domain Services when the schema is extended. The container must be created one time for each domain that includes a Configuration Manager primary site server or secondary site server that publishes site information to Active Directory Domain Services Create the necessary accounts and group created before installation. You can use different name but i’ll refer to these names throughout the guide.

Run this script in an elevated command prompt order to open the necessary ports needed for SCCM.

** If you are using custom ports, change the values before running the script. **

Place a file name no_sms_on_drive.sms on the root drive of each drive you don’t want SCCM to put content on.

On the Primary site server, the following components must be installed before SCCM installation. We’ll install all these components using a PowerShell script.

On the Site Sever computer, open a PowerShell command prompt as an administrator and type the following commands. This will install the required features without having to use the Windows 2012 GUI.

Ensure that all component are showing as SUCCESS as an EXIT Code. It’s normal to have Windows Update warnings at this point. Add both SCCM computer account and the SCCM Admin account to the local administrator group on the site server.

If applicable, uninstall SCCM 2007 client and FEP if present on the server before the installation. If the client is present, the 2012 SCCM Management Point installation will fail.

Run windows update and patch your server to the highest level

Your server is now ready for the SQL installation.

33 Comments on “Requirements and Recommendations before installing SCCM 2012 R2”