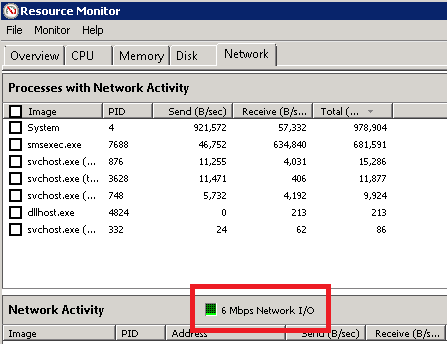 I had an interesting case where OSD deployment and application download were really slow using SCCM 2012 R2. My first thought was to apply KB2905002 which resolves SCCM Slow Distribution Point.

This KB was already applied and still, the download of the .WIM during a task sequence was taking 30 minutes just to download.

Application installations in software center that was using the same DP was also experiencing slow installs.

Reviewing the SMSTS.log during the OS Deployment had no errors.

Looking at the Resource monitor, I saw that the network throughput was around 6 Mbps on a Gb connection… Something was wrong.

My second thought was to check in IIS to see it there was a speed limitation there. Bingo !

The default IIS Site was limited to 5 Mbps. After removing the limitation the same WIM deployment took 2 minutes and an application that was taking 1h to installed, took 18 minutes. Resource monitor shows speeds up to 600 Mbps.

Here’s how to check that :

Be sure to remove this limitation to experience good deployment speeds.