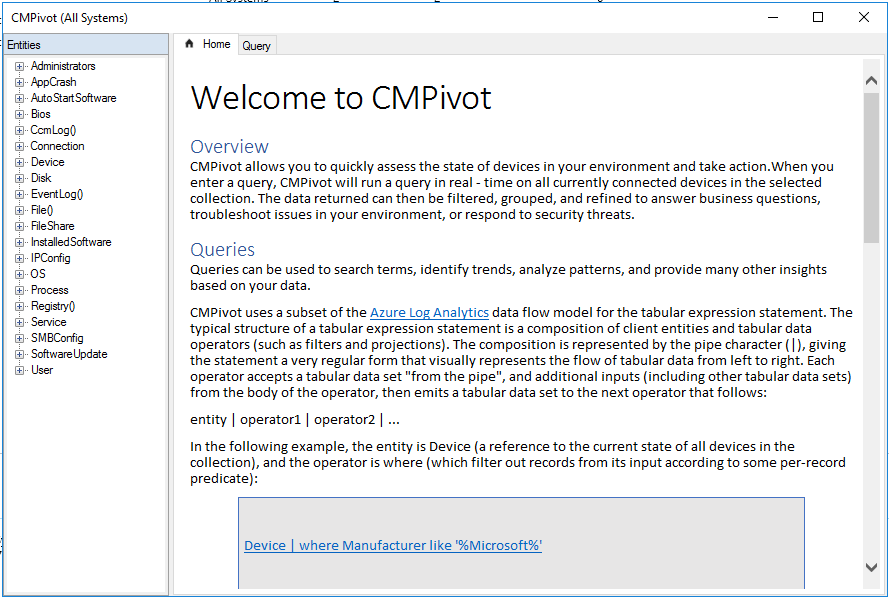 SCCM CMPivot has been introduced in SCCM 1806 and it’s making its way to be a pretty useful addition. If you are not familiar with this new feature, you can read about it in our previous post which describes how to use it. The goal of this post is to give you a list of SCCM CMPivot Query Examples. When we began using CMPivot, we were a bit lost. We are pretty comfortable with various programming language but CMPivot uses a subset of the Azure Log Analytics data flow model for the tabular expression statement which was new for us. The official Microsoft documentation states : SCCM CMPivot Query Catches This results in a pretty simple language but there are a few catches that I learned : Watch out for Uppercase letter, Where is not the same as where. If you use an “W”, you’ll end up with a Failed to parse … END_OF_DOCUMENT_TOKEN_TO_BE_REPLACED 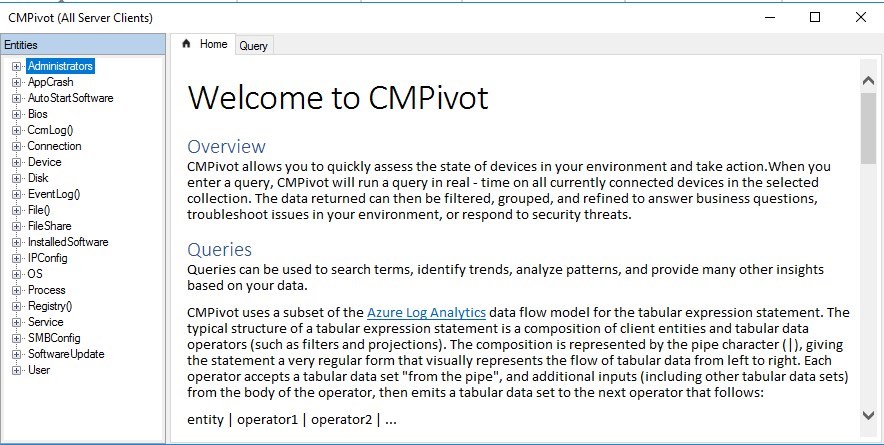 SCCM Current Branch 1806 is loaded with amazing features. In this post, we will cover the latest addition in the reporting space: CMPivot. SCCM has always been good with reporting and inventory of it’s managed devices but SCCM data is up-to-date at the last time the inventory has been run. SCCM CMPivot allows SCCM administrators to initiate a live query on selected computers on a specific topic. The result of that query can then be used to mitigate and fix potential issues. How many time were you asked “what is the current state as of NOW?” well, you’ll finally be able to answer appropriately with SCCM CMPivot. In this post, we will covert how to use CMPivot to create a basic query and how to use the result of this query. SCCM CMPivot Prerequisites SCCM must be Current Branch 1806 or higher SCCM clients must be running 1806 or higher Powershell  v5.0 on target … END_OF_DOCUMENT_TOKEN_TO_BE_REPLACED