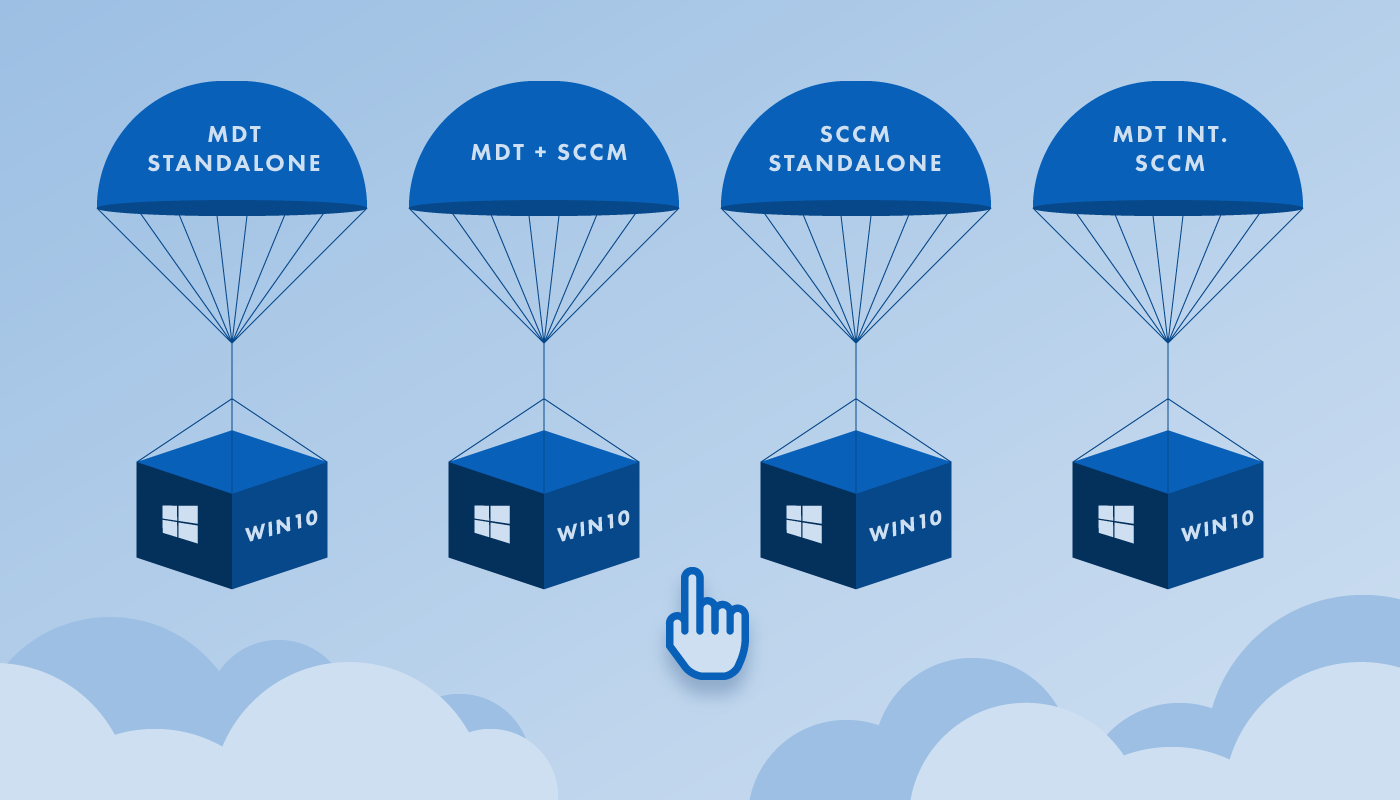 If your company runs Microsoft System Center Configuration Manager (SCCM), and you’re trying to figure out the best way to deploy Windows 10, you have choices. Specifically, there four key options you might want to choose between:

Making the right selection to meet the needs of your organizations is not always clear so in this blog post, we’ll briefly explain each option, and outline some of the trade-offs between them.

The MDT is a free toolkit for automating deployment of Windows 10 to computers. It works with other versions too, but Windows 10 is the big deployment topic these days. Basically, MDT configures unattended setup files for Windows, and it packages other needed content and files. This gives you an image file you can distribute and use to migrate systems to Windows 10.

MDT as a standalone tool is great for tiny environments without a lot of computers to migrate. MDT is also a fine fit for environments that are not connected. It is not fully automated, instead using what Microsoft calls Lite Touch Installation (LTI). (I kind of like that they used the fun spelling of the word light.) Some human interaction is required to complete the deployment.

It’s generally fast for creating reference images, and it doesn’t require much infrastructure. In general, with MDT, you should use thin reference images instead of thick.

If you are in a very big organization, then Microsoft recommends a combination of MDT and SCCM. More specifically, if you have thousands of computers and many different applications to manage it’s a good direction to consider.

Here’s how it works. You build and test your images using MDT standalone. Then you can deploy the images to a small number of pilot/test users with Windows Deployment Services (WDS), a network-based Windows installation technology from Microsoft for doing LTI deploys using PXE. (Like MDT, WDS is free.) Then once it’s all confirmed to be golden, you can do mass rollouts with SCCM.

SCCM actually can create OS images in the WIM format. Usually images created this way are thick, but that’s optional, it can create thin images as well. Then once an image is created, you can deploy it with SCCM the same way you would deploy an image that was created in MDT.

However, this method of creating images is not considered especially robust. The Microsoft SCCM Product Team recently stated unofficially at MMS that they will be expanding SCCM to include all the functionality of MDT. The reason, they said, is that customers shouldn’t have to use two tools to do Windows deployments. However, they were extremely clear that MDT will always exist as a standalone product also. No time frames were given for any of this.

Now here is a truly powerful combination. By integrating MDT into SCCM, admins get awesome new powers. You can now use Task Sequences to utilize MDT’s rules, which provides a lot more deployment flexibility. It exposes a number of other advanced capabilities as well. This combo also lets you do fully automated deployments, Zero Touch Installation (ZTI) in Microsoft speak. With ZTI there is no user intervention on the targeted computer, and it’s ideal for distributed, high-volume environments.

Ultimately, this is a difficult decision that only you can make, based on what you know about your company’s environment and needs. There also may be some trial and error, but remember, starting with MDT is always safe. Work you do there applies to all the other scenarios, except SCCM native, which is less commonly used.

You should also evaluate your entire SCCM architecture. If you have a large number of operating locations, or thousands of endpoints, you may want to investigate content distribution engines such as Adaptiva OneSite’s Windows 10 Rapid OSD. It can eliminate the need for remote servers (DPs, PXE points, SMPs), speed WAN distribution, and lighten your workload as an admin.

Whatever method you choose, be sure to check in with System Center Dudes for the latest deployment tips and technologies. To learn more about OSD options with SCCM, you can also check out Adaptiva’s recent report co-written by Microsoft MVPs on the “Top 10 Best Practices on Windows 10 OSD with ConfigMgr” available here.

One Comment on “Which Windows 10 Deployment Methods Suits You?”