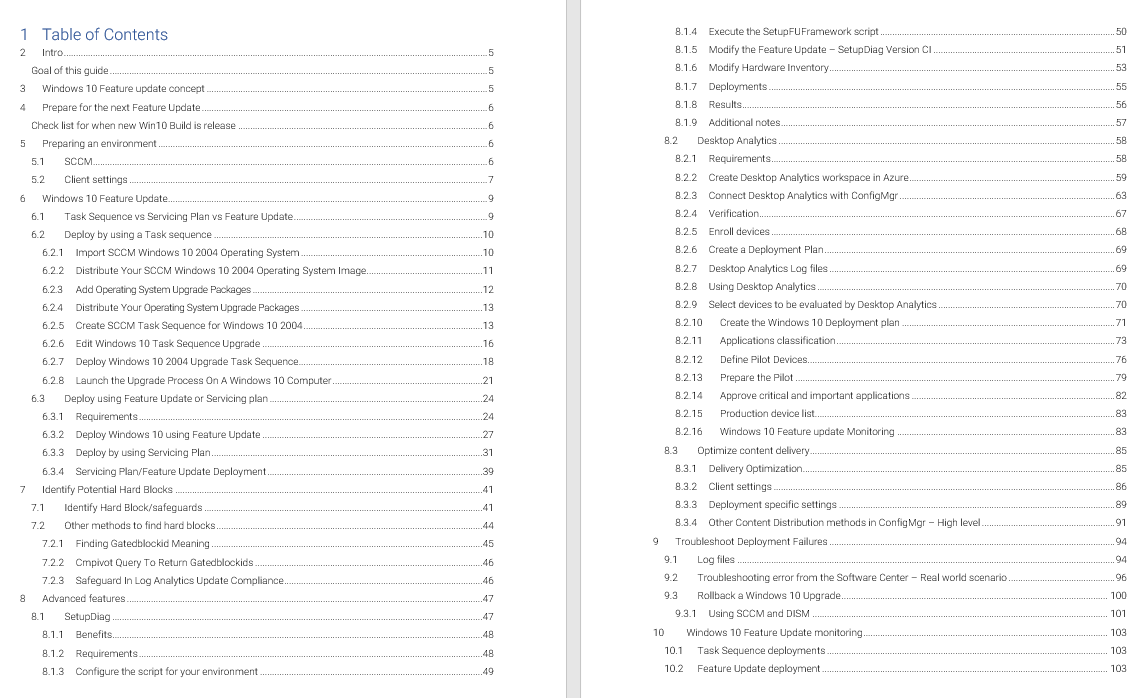 This is rather an unusual post since we are used to writing and share our stuff publicly available for all. Once in a while we put lots of effort and writes guides that contain useful information on a specific topic. Since the incredible amount of work, we decide to release it as a payable guide, as others would write a book. Many of the topics covered in this Windows 10 Feature Update Troubleshooting guide are already available on our website while other topics go deeper in the paid guide.

So there it is, a guide that contains 106 pages of useful information about all you need to know about Windows 10 Feature Update. If you’re an SCCM Admin and have Windows 10 workstations, chances are that you already have to support that.

In this post, we are showing you all the topics covered by this guide as well as releasing the first 6 sections of the guide. If you’re interested to know more about Windows 10 Feature Update Troubleshooting, you can buy the rest of the guide in our online shop. There are also some screenshots of the guide at the end of this post.

Download the full 106 pages document in our online shop

Goal of this guide

You may wonder as to why this is important? Each Windows 10 version has a much shorter life span than Windows 7 or 8. You may remember the days where a huge project was launched to migrate from Windows XP to 7 and then from 7 to 10. These days are over, and you must now handle Windows 10 updates in your operational tasks.

It sounds fairly easy, and yes Microsoft did a great job of improving the process overs the first 1507 Windows 10 edition. As SCCM administrators ourselves we had to learn the process and most importantly where to look in case of problems. Your migration may work well on 90% of your computer but if you’re managing… let’s say a thousand computers, you may end up troubleshooting 100 computers.

Using SCCM we can show you how to save time, build automated tasks and most importantly: prevent failures from happening.

We hope this guide will help you.

Windows as a service provides a new way to think about building, deploying, and servicing the Windows operating system. The Windows as a service model is focused on continually providing new capabilities and updates while maintaining a high level of hardware and software compatibility. Deploying new versions of Windows is simpler than ever before: Microsoft releases new features two to three times per year rather than the traditional upgrade cycle where new features are only made available every few years. Ultimately, this model replaces the need for traditional Windows deployment projects, which can be disruptive and costly, and spreads the required effort out into a continuous updating process, reducing the overall effort required to maintain Windows 10 devices in your environment.

There are 2 key concepts to understand is that:

To stay up to date and supported, you need to update Windows 10 on a yearly basis. In many enterprises we worked for it mean updating at least once a year.

You can refer to Microsoft Windows 10 Documentation hub if you need more information.

Prepare for the next Feature Update

Check list for when new Win10 Build is release

Feature updates for Windows 10 are released twice a year, around March and September, via the Semi-Annual Channel. They will be serviced with monthly quality updates for 18 or 30 months from the date of the release, depending on the lifecycle policy.

Microsoft recommend that you begin deployment of each Semi-Annual Channel release immediately as a targeted deployment to devices selected for early adoption and ramp up to full deployment at your discretion. This will enable you to gain access to new features, experiences, and integrated security as soon as possible.

Once you’ve deployed your first Windows 10 update, you need to build a process for updating your tasks.

Following Microsoft release, you could do it as much as 2 times a year. Some organization take the decision to update only using the March build and skip the September one. Just make sure that you stay supported by updating your operating systems on a regular basis and not wait 3 years before taking action.

Each time you take the decision to deploy a new Windows 10 build, you must redo the step describe in our guide. We suggest to keep a checklist to make sure that no steps are forgotten:

Before deploying Windows 10, there’s a couple of requirements:

Multiple options are available. Since the size of Feature Update is quite important, leveraging the various options is a good idea to review prior to release a new Windows 10 build.

With more remote workers than ever, implementing a Cloud Management Gateway could be the missing piece to a successful rollout.

Those settings will be honored in most cases.

This should be reviewed with the Client Cache settings options

In order to upgrade an existing Windows 10 to Windows 20h2, you have 2 choices: You can use an upgrade Task Sequence or you can use Feature Update with or without Servicing Plans.

There is a strong debate over which is the best method. Each organization is unique and you should plan based on your organization needs.

For example, Windows 10 is resetting pretty much anything related to regional settings, keyboard, start menu and taskbar customization. Things are getting better from one version to another but if you’re upgrading from an older build, let’s say 1511, expect some post-configuration tasks… and the only way to do that is using a task sequence.

Feature Update can be deployed like any other release of monthly update, this process needs to be started from under Servicing plan. A common misunderstanding is that it is mandatory to use Servicing plan to deploy Feature Update with SCCM. This is not the case. It is the simplest method to implement and start testing.

Servicing Plan has the simplicity, you set your option and forget, as Automatic Deployment Rules does for Software Updates. We yet did not have any client that does not want any control over Windows 10 upgrade in their organization. We totally understand the point of Servicing Plan and they will be useful in a couple of releases when Windows 10 upgrades will be an easy task… but for now, it’s not, unfortunately.

Download the full 106 pages document in our online shop