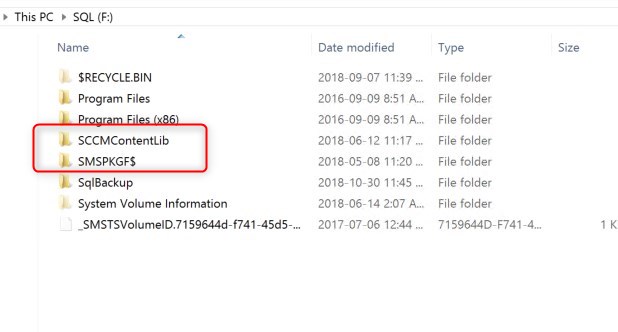 One of the common mistakes we still see is having SCCM Move Content Library folders on many different drives, most of the time not on purpose. Usually, this will lead to the C drive being full, or the drive where the SQL database sits. This will then cascade into a series of errors all over SCCM. In this post, we will show how to use the SCCM Content Library Transfer tool to move distribution content folders Prerequisites If you are running SCCM latest build, the tool is now build-in the install folder If you are running a version older than Current Branch 1802, you will need to download the SCCM 2012 toolkit Move SCCM Move Content Library Find the drives where there are Distribution Point content folder that shouldn’t be there You can see the Content Library folder location in a registry key:  HKLM\Software\Microsoft\SMS\DP\ As stated in the limitation, the Distribution … END_OF_DOCUMENT_TOKEN_TO_BE_REPLACED 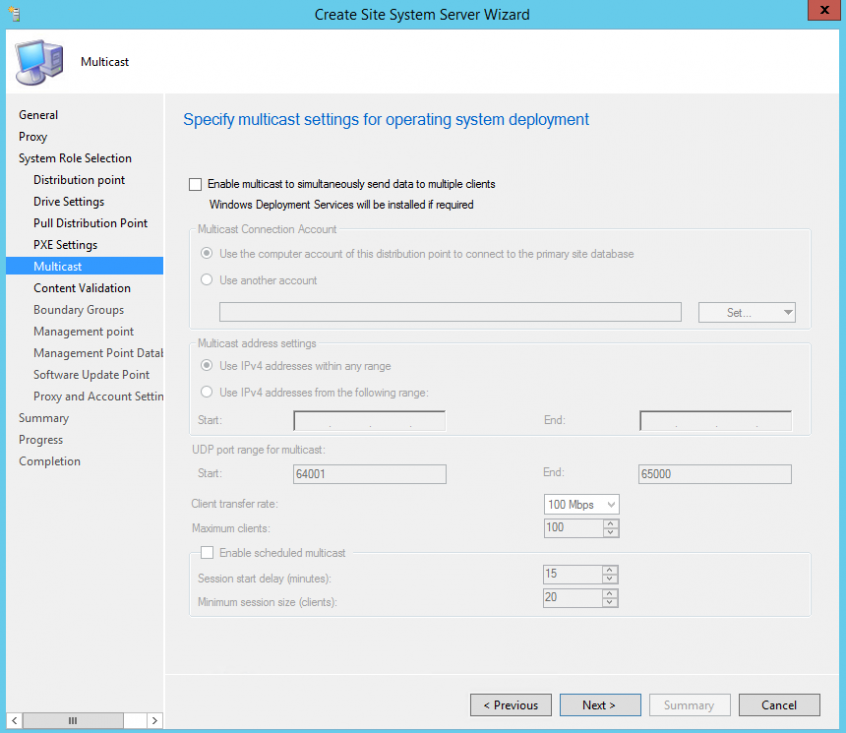 There may come a time in your SCCM administration days where some special needs may arise. I had such a case recently. Long story short, in our company, we have a windows domain where no trusts exist with our primary domain where SCCM resides. The problem with that is since there is no visibility in between the two domains, how do you get the servers or workstations managed? This post will describe Installing SCCM DP MP SUP in Untrusted Domain. Default settings? Such as a default Windows Update setup. Nah, I like to have some degree of control over who does what and when. Install a standalone WSUS server? Yes, this is a viable option where you can set and forget it. But it probably doesn’t fit with your SCCM setup. Install a completely separate SCCM infrastructure? Sure this works. But… Do you like doubling all your work? I surely … END_OF_DOCUMENT_TOKEN_TO_BE_REPLACED

Many challenges come with managing and maintaining  System Center Configuration Manager in large environment. In previous posts, we covered how to limit Pull DP bandwidth and How to manage Pull DP with collections to ease management in large environment. Probably the biggest challenge with large environment,  is to keep SCCM up to date. In this post, we will provide in depth details, considerations and useful tips on Pull DP upgrade for large SCCM environment. The goal is to provide ways to prevent upgrades of SCCM to become a nightmare by taking more time than planned and/or heavy hit on the network. We will cover theses subjects : Automatic package update and distribution How to work around automatic package update and distribution Pre-requisite checker Upgrade time lapse Distribution point and PullDP upgrade ratio What happen while Distribution point/ Pull DP upgrade Note that all details and considerations are regarding major upgrade like service pack upgrades and major … END_OF_DOCUMENT_TOKEN_TO_BE_REPLACED 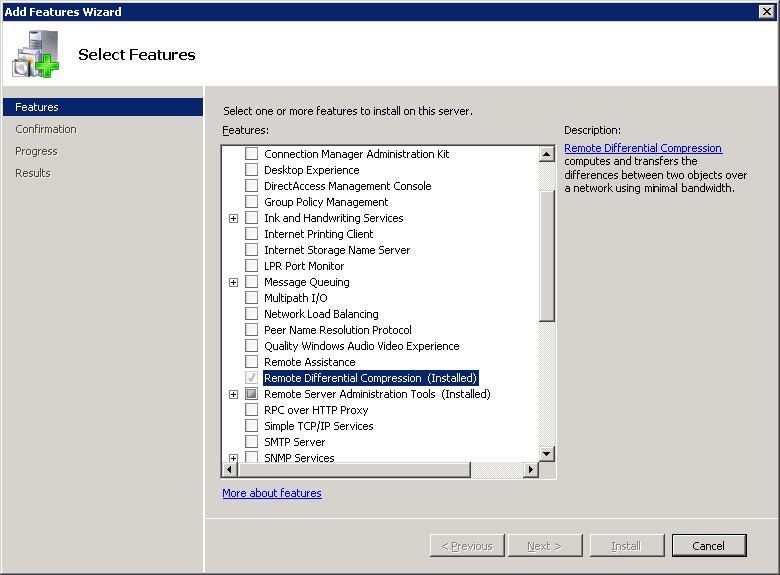 In the first part of this SCCM 2012 and SCCM 1511 blog series, we planned our hierarchy, prepared our SCCM Server and Active Directory. In part 2, we installed and configured SQL in order to install SCCM. In part 3, we installed a stand-alone SCCM Primary site. In the next 16 parts, we will describe how to install the numerous site systems roles available in SCCM 2012 R2 and SCCM 1511. Role installation order is not important, you can install roles independently of others. In this part, we will describe how to perform an SCCM distribution point installation. I saw a lot of posts recently on the Technet forum which leads me to think that there’s a lack of documentation explaining this. SCCM Distribution Point Installation Several distribution points can provide better access to available software, updates, and operation systems. A local Distribution Point also prevents the installation through the WAN. Pre-Requisites Functional SCCM 2012 … END_OF_DOCUMENT_TOKEN_TO_BE_REPLACED 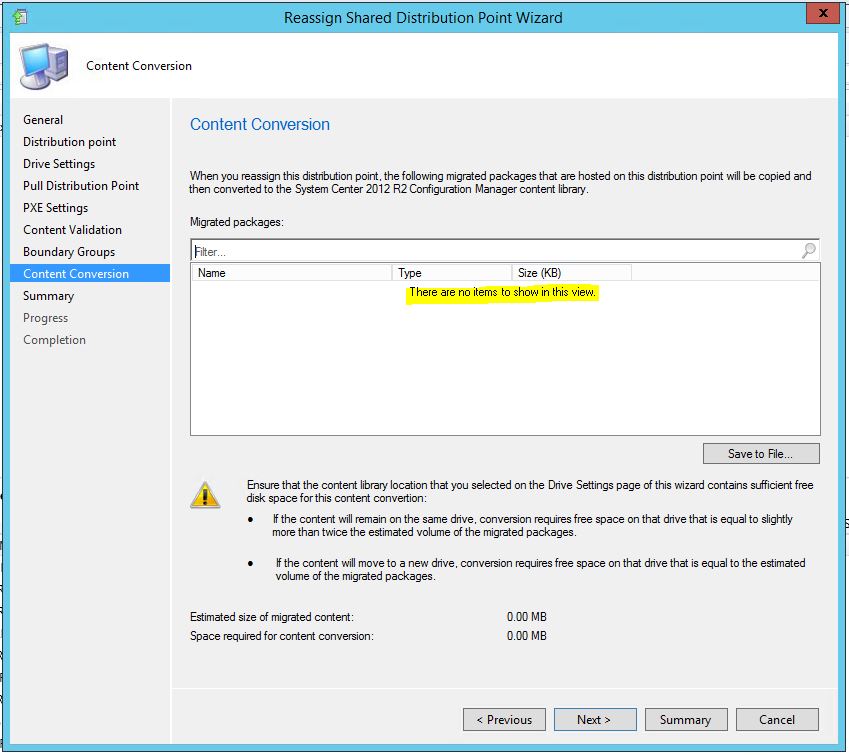 Symptoms :SCCM Administrators tries to Upgrade/Reassign a distribution point in a migration project. The Content Conversion tab is displaying There are no items to show in this view. This blog post will show how to fix this SCCM Content Conversion error. If you complete the wizard, the DP gets upgraded/reassign but the content is not (obviously). This happens because the package assigned to this DP is not migrated to the SCCM 2012 hierarchy. Microsoft definition of the upgrade feature : Many customers have large Configuration Manager infrastructures and are reducing primary or secondary sites to simplify their environment. They still need to retain distribution points at branch office locations to serve content to managed clients. These distribution points often contain multiple terabytes or more of content. This content is costly in terms of time and network bandwidth to distribute to these remote servers. This feature lets you reassign a distribution point … END_OF_DOCUMENT_TOKEN_TO_BE_REPLACED 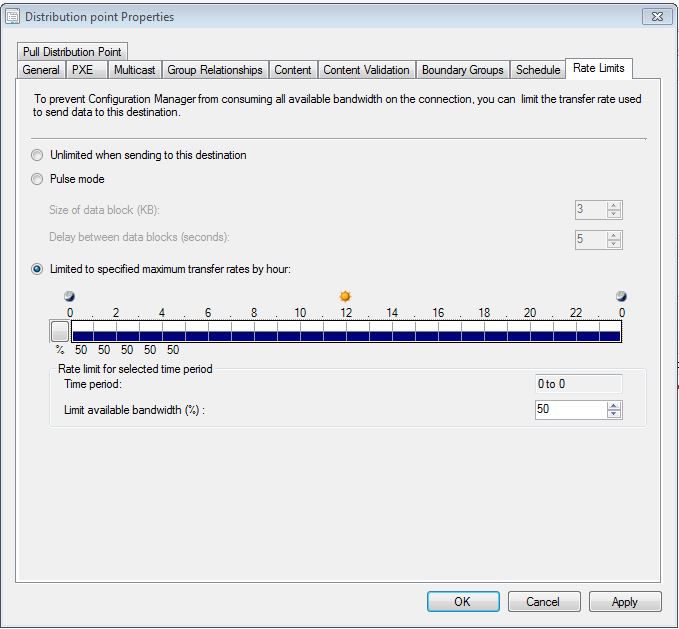 This post will explain how to handle SCCM Distribution Point Network bandwidth limitation. One of my clients wanted to limit bandwidth on their package distribution. Their reflex was to go in the DP properties and limit the available bandwidth. This was the way to go but their interpretation of the rate limit was wrong. This is one misinterpreted (and not well documented) feature of SCCM. Here’s what you see: Most people think “Hey I’ve got a 100Mbps link so let’s put 50% to limit SCCM to 50Mbps”… Wrong ! This is not how it works. Let explain how you should read it. I’ve found 2 really good article on external site about this: In resume SCCM will use the % you specify as to when it can use 100% of the available bandwith. In my example, I’m telling SCCM to use 100% of the available bandwidth 50% of the time (0 … END_OF_DOCUMENT_TOKEN_TO_BE_REPLACED