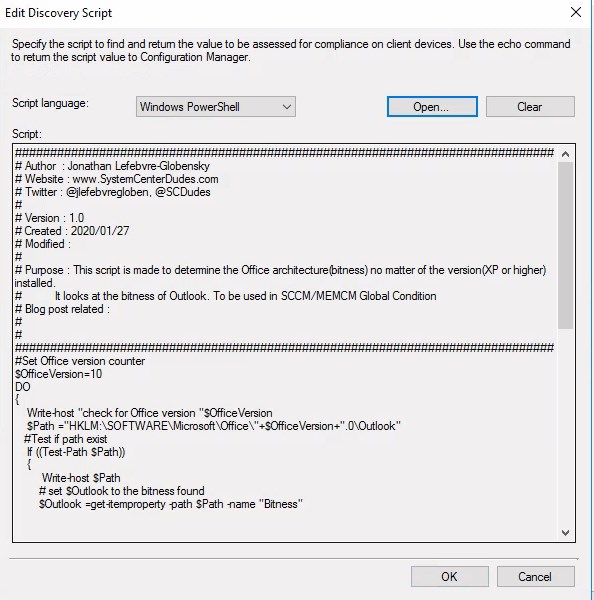 I recently came across an issue where a MEMCM) Global condition was detecting the Office bitness (architecture), but only to one specific version(example below). This lead to a requirement issue where the computer was running another version of Office that wasn’t covered by the global condition. With that said, we still needed a requirement only for the architecture of Office, while the version was not that important for now. I’ve uploaded a new script to Technet Gallery that returns the Office Bitness no matter what version is installed (from Office XP to the latest). In this post, I’ll describe how to use the script with a MEMCM global condition as a requirement for an application. MEMCM Global Condition Office Bitness Requirement Download the Office Bitness detection script from Github The script The script is looking at the Bitness registry key of Outlook. The script will return the value of Bitness. … END_OF_DOCUMENT_TOKEN_TO_BE_REPLACED

I did blog post year ago on Microsoft office product versions with its architecture type and count. But lately, my blog readers have requested to add Office 365 ProPlus product into the report. The Original Office Product report was created to include all Microsoft Office products from Office 2007 to Office 2016 but it doesn’t have any click-to-run (C2R) products which are Office 365. So we started looking around and developed the report for you. This free report will have all Microsoft Office products information with its architecture type (x86 or x64) and the count. The report can be run on a specific collection which is useful to scope specific group of machines. This can be used as all-in-one SCCM report for Microsoft Office product versions with architecture type. This report comes with a drill-down feature to see the list of all devices with the selected product. You’ll need our … END_OF_DOCUMENT_TOKEN_TO_BE_REPLACED