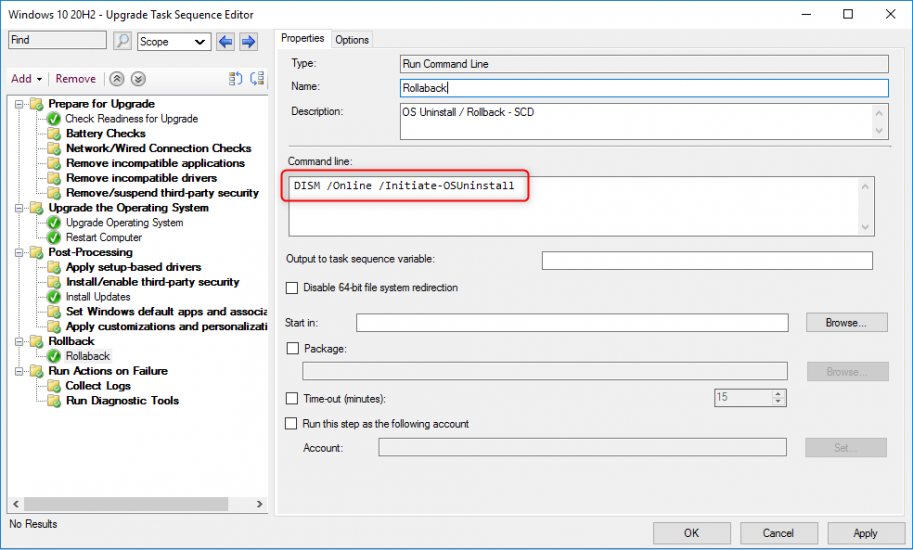 By default, Windows 10 gives you ten days to roll back major upgrades. After ten days, Windows deletes those old files to free up disk space. This is a change from the initial versions of Windows 10, which gave you 30 days to decide.

Rollback Windows 10 to a Previous Version

If you have compatibility issues with some OS component or applications after a Windows 10 Feature update, you can uninstall the updates using either Configuration Service Provider (Intune) or DISM (SCCM/MEMCM)

The term Uninstall is important here because Microsoft tools are not using the Rollback term, it’s using the Uninstall term. A slight, but important difference.

So let’s begin with explaining how to do the Windows 10 rollback action using SCCM.

There no built-in action in SCCM to do a Windows 10 rollback. The product group has confirmed this in this User Voice Item. They are basically saying that you need to use the provided DISM commands for that.

The reason is pretty simple, some of the DISM commands were introduced in the latest Windows 10 builds.

In short, the client gets stuck in Provisioning mode and fails in previous Windows and SCCM version.

Once again, the resolution is to use Windows 10 1803+ and SCCM 1902+ to avoid this problem. You can read the various resolutions you can take if you’re not running these versions.

So, if you’re running a supported Windows 10 and SCCM version. You can initiate a Windows 10 Rollback by using DISM.

You can use a package, a script or a Task Sequence to run the following command :

To do a Windows 10 Rollback using Microsoft Intune, you must use a Configuration Service Provider (CSP). More specifically the Update CSP which manage and control the rollout of new updates.

This was introduced in Windows 1803. This CSP can’t be used if you’re running a previous Windows 10 build.

Intune is basically using WUfB policy to manage the Windows 10 Update Rings. So you have the choice to use a Custom CSP or use the built-in feature