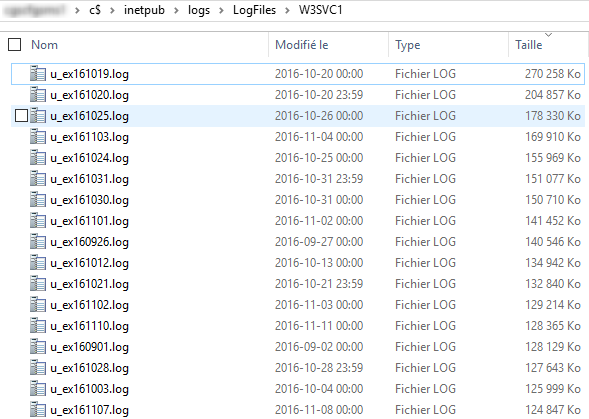 After a couple of weeks of running an SCCM server, you may get the C:\ drive full. What are the best practices to save disk space on an SCCM server? The first thing we check is how much space is filled by SCCM IIS log files. Usually, it takes a couple of GB on the drive. It’s an absolute must to implement solutions to delete SCCM IIS logs files from your primary server. The SCCM IIS logs files are usually in C:\Inetpub\Logs\LogFiles and are increasing at a rapid pace. In my lab environment with 50 clients, it’s growing at about 1MB per day. Not much… but on an SCCM site, I’m actually managing with a couple of thousand clients, it grows 150 MB a day. It could fill up a drive pretty quickly. There are numerous ways to manage SCCM IIS log files : Delete the logs manually or use a scheduled task Use … END_OF_DOCUMENT_TOKEN_TO_BE_REPLACED

Introduced since SCCM 2012 R2, SCCM Wifi profiles are used to send Wifi configurations to clients. It can be useful if your company is not using certificates or any automated authentication methods. A smaller organization that uses a simple WPA2 setup can use SCCM Wifi profiles to send Wifi SSID and password so that the computers connect automatically to that network. You can also use Wifi profile to manage mobile devices with Intune but we won’t cover this scenario in this post. The major drawback of the SCCM Wifi Profile is that it’s impossible to enter the Wifi password using the console UI. (Even in the newest versions). We will show you how to deploy Wifi profiles on a Windows 10 or Windows 8.1 computer, including the Wifi password using an XML file. How to deploy SCCM Wifi Profiles with password to Windows 10 devices Since it’s not possible to enter a password in … END_OF_DOCUMENT_TOKEN_TO_BE_REPLACED

Windows 11 has been released by Microsoft on October 5th, 2021. If you are planning to deploy and manage Windows 11 using SCCM or Configuration Manager, this post has you covered. Like any other Windows version, you need to do a couple of tasks before you can do an SCCM Windows 11 Deployment. In a previous blog post, we listed everything you need to know about SCCM and Windows 11. You can read the whole post but here’s the important part: SCCM is ready to support Windows 11 starting with SCCM version 2107. You need to run at least SCCM 2107 and your device needs specific requirements. Let’s get started to Deploy Windows 11 using SCCM / MEMCM ! Table of Content Prerequisites Check if you have an SCCM Supported version Upgrade your Windows ADK Download Windows 11 ISO Mount and extract the ISO file Import the Windows 11 WIM … END_OF_DOCUMENT_TOKEN_TO_BE_REPLACED 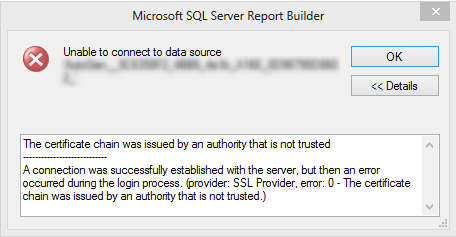 If you’re like us and love to create and build awesome reports, you may get an error when running report builder on a remote computer. When editing an SCCM report in Report Builder you may receive the following error: A connection was successfully established with the server, but then an error occurred during the login process. (provider: SSL Provider, error: 0 – The certificate chain was issued by an authority that is not trusted.) SCCM Report Builder error – Cause This error occurs because you don’t have the required SCCM SQL certificate on the computer running Report Builder. Follow the following steps in order to resolve the issue. Export the certificate from your SQL server On the SQL Server Click the Start menu, click Run, and then type mmc. Click Enter. This starts the Microsoft Management Console (MMC) In the console, click the File menu and then click Add/Remove Snap-in On the … END_OF_DOCUMENT_TOKEN_TO_BE_REPLACED

SCCM Active Directory System Discovery is a discovery method to bring discovered devices into your SCCM server. It’s one of the most used discovery methods for its simplicity. Many organization extends their Active directory to include custom attributes to their records. By default, SCCM brings a couple of default Active Directory attributes but it’s also possible to bring any custom attribute that you may have. The good news is that it’s quite simple to add these custom Active Directory Attributes to your SCCM Discovery methods. What is more complicated is how to fetch this data once it’s discovered. Over the years, we’ve seen much different information stored in AD Attributes. For this post, we’ll add the Description attribute from a computer account to SCCM and describe how to query this information to create collections or reports. SCCM Custom Active Directory attributes Configuration The first step is to find the name of … END_OF_DOCUMENT_TOKEN_TO_BE_REPLACED 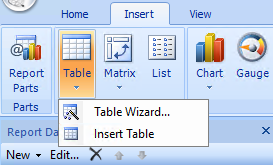 One of our favorite tasks when it comes to ConfigMgr management is SCCM Report Creation. Not only it bring value to an SCCM installation, but it also brings visibility to your hard work toward your management. Without SCCM reports, this huge management tool is running silently on all your devices but you’re not benefiting from all the advantages. It’s like having a sports car and discovering the Autobahn … ok maybe not. But what makes a good SCCM report? Data, data, data This is the more important part of your reports. You need to query the right SQL views in the SCCM database. If you’re showing incorrect information, your report will be useless Building an efficient SQL query is the hard part of report creation. Without any SQL skills, it will be hard to achieve what you want… but, everything can be learned. Two years ago I’ve never done an … END_OF_DOCUMENT_TOKEN_TO_BE_REPLACED 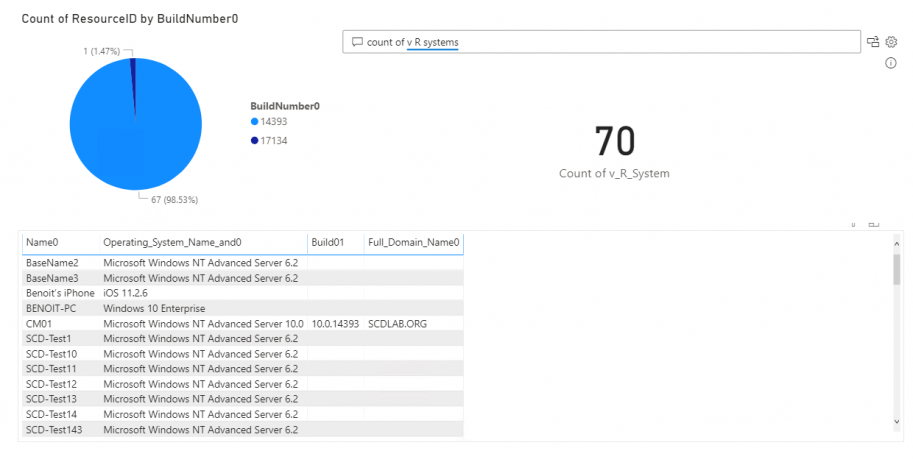 Beginning with SCCM/MEMCM 2002, it’s possible to Integrate Power BI Report Server to an existing Reporting Point or to a site that doesn’t have a reporting point installed. Doing so will give you the ability to manage your Power BI Dashboard the same way you manage your SSRS report. All done directly from the console makes it easier to deploy and edit your existing dashboard and to create a new one. You may already use many SSRS reports to monitor and visualize your SCCM data. Microsoft has released Power BI a couple of years ago and has its advantage over SSRS A large amount of data can be processed Rich visuals Less engineering resources to use It can be embedded into your own custom apps System Center Dudes team has decided to develop a series of Power BI dashboard. We think that, if you have the skills, the visualization of your SCCM data should be … END_OF_DOCUMENT_TOKEN_TO_BE_REPLACED

Beginning in SCCM 2203, you can now set a custom icon for Task Sequence and packages in the Sofware Center. In the past, it was possible to add an icon to Applications but not to task sequences and packages. Prior to 2203, task sequences and packages were showing a generic icon which decrease the user experience to identify the needed software. In this blog post, describe the limitations and we’ll show you how to add SCCM Task Sequence and Package Icons to the Software Center. This 2203 new feature is another great addition making SCCM better from an end-user experience perspective. The default SCCM package and task sequence icon can now reflect your purpose instead of this : Display this, to your users : SCCM Task Sequence and Package Icons Requirements Before seeing Task Sequence and package icons, make sure that your site is running SCCM 2203 and that your … END_OF_DOCUMENT_TOKEN_TO_BE_REPLACED

SCCM Reporting is a great way to see insight of your inventory and data. There’s many custom reports out there on the internet. If you download a custom report, you’ll have a RDL file. This RDL then need to be uploaded on your report server. You can do it manually using the web portal or use a script. This post will show all the ways you can upload an RDL file on an SCCM Reporting Point. An RDL file is simply an XML application and a standard proposed by Microsoft for defining reports. SCCM Upload RDL file Requirements SSRS installed and all running components. If you don’t have a reporting server, you can refer to our post on how to install SCCM 2012 Reporting Services Point. A healthy RDL file. A user account with enough access to upload a report. Please read predefined roles on MSDN for more detailed information. Upload the RDL … END_OF_DOCUMENT_TOKEN_TO_BE_REPLACED 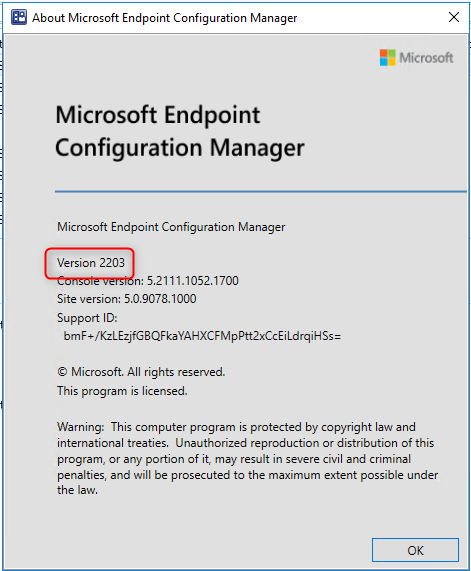 Microsoft has released the first SCCM version for 2022. SCCM 2203 has been released on April 8th, 2022. This post is a complete step-by-step SCCM 2203 upgrade guide, meaning that if you want to upgrade your existing SCCM/MEMCM installation to the latest SCCM/MEMCM updates, this post is for you. If you’re looking for a comprehensive SCCM installation guide to building a new server, refer to our blog series which covers it all. You won’t be able to install SCCM 2203 if you are running SCCM 2012. Well, that’s an odd phrase! Thank you current branch naming. SCCM 2203 is a baseline version. This means that if you’re downloading the source from Volume Licensing, SCCM 2203 will be the starting version of your new SCCM site. At the time of this writing, SCCM 2203 is available in the Early update ring. You must run the opt-in script to see it appear in … END_OF_DOCUMENT_TOKEN_TO_BE_REPLACED