We compile a list of SCCM client version, build numbers and cumulative updates since the 2012 RTM release. SCCM Upgrades are released 3-4 times a year. After an SCCM Upgrade, it’s important to upgrade your SCCM Client version to the latest version. Cumulative updates are cumulative, meaning that the latest one includes the previous one. (Ex: You don’t need to apply CU1 if you plan to install CU2) Once you apply a cumulative update, your SCCM version on the site server itself will not change. The site server will show the latest major SCCM release (RTM,SP1,R2). However, the new SCCM version numbers will show on your Consoles and Clients. We recommend that you upgrade all your clients when you are applying the latest SCCM version. We release a step-by-step guide on how to update your SCCM server each time a version comes out. Just use the link next to the client … END_OF_DOCUMENT_TOKEN_TO_BE_REPLACED 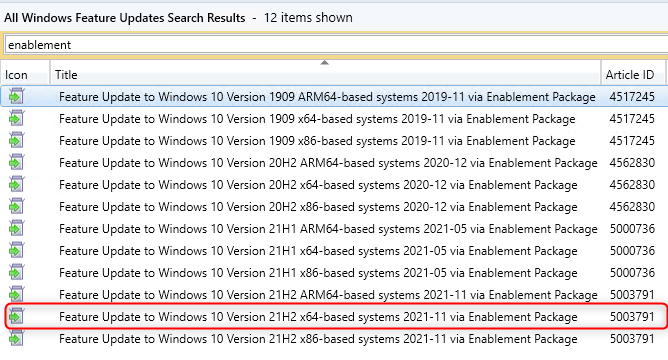 This blog post will cover all the tasks needed to deploy the new SCCM Windows 10 21H2 Upgrade. We will cover scenarios for new and existing computers that you may want to upgrade. Microsoft published the Windows 10 21H2 feature update on VLSC on November 16th 2021. You may also need to deploy Windows 10 21H2 to your existing Windows 10 computer to stay supported or to benefit from the new features. There’s a couple of important change in this release. Here are the main support and deployment features : If you have devices running Windows 10, version 2004 or later, you can update them quickly to Windows 10, version 21H2 using an enablement package New Windows 10 release cadence that aligns with the cadence for Windows 11. Microsoft is now targeting annual feature updates for Windows 10  Start of the 30-month servicing timeline for Windows 10 New W10 Enterprise … END_OF_DOCUMENT_TOKEN_TO_BE_REPLACED 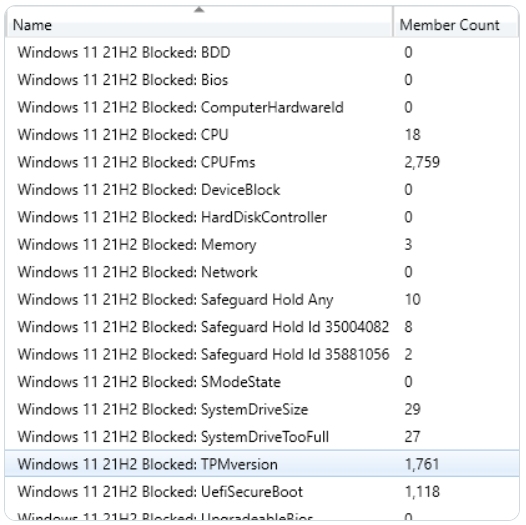 Based on the popularity of my previous post published in 2018 , 2019 and 2020, I decided to do a 2021 refresh of the SCCM Must have Tools and blog list since there’s always new stuff coming out. To the list of SCCM Must have Tools, I added must-have read blog posts that you could have missed this year. The tools are listed in no particular order. The list could have been longer but I needed to choose from my top personal list. If you feel that I’ve forgotten your awesome contribution to the SCCM community, please use the comment section and it will be a pleasure to promote it. SCCM MUST HAVE TOOLS and BLOG LIST This year was mostly work from home for lots of SCCM/MEMCM administrators. But there’s some light at the end of the tunnel. Some events like MMSOA made an on-premise event which gives a … END_OF_DOCUMENT_TOKEN_TO_BE_REPLACED 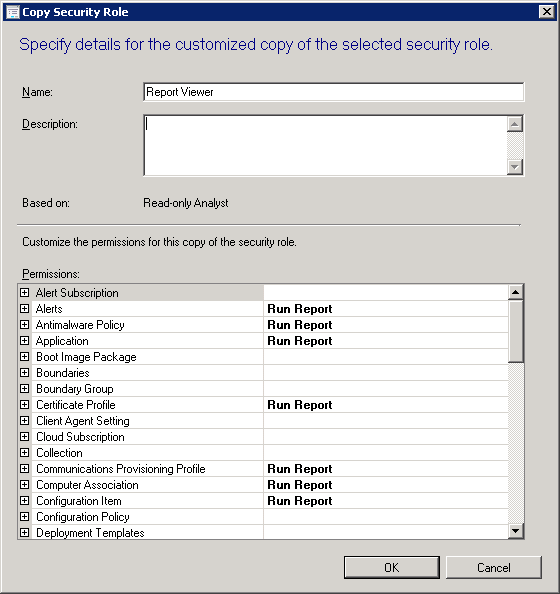 In many SCCM environments, we see administrators that want to give access to the SCCM reporting node only. Unfortunately, there’s no SCCM Report Viewer role when you browse to the Security role of the console. So … What if you want to give a user the right to only run reports? This blog post will show how to create an SCCM report viewer role in the console. A simple way to do this is to grant access to the Read-only Analyst role which will be enough to run a report but maybe you don’t want them to see all nodes and get lost in the console. If you’re unfamiliar with role-based administration, we suggest you first read the Microsoft docs which explains the basics. It combines security roles, security scopes, and assigned collections to define the administrative scope for each administrative user. We’ll use this concept to create a new … END_OF_DOCUMENT_TOKEN_TO_BE_REPLACED

Following a blog post on receiving an email after an operating system deployment completes, I received a friendly tip to try replicating the behavior using the new External notifications feature available since SCCM 2107. Challenge accepted! Beginning with SCCM 2107, you can enable the site to send notifications to an external system. You can use Azure Logic Apps to configure subscriptions to send these notifications. These notifications can be based on SCCM events like status message filter rules. In the previous post, we were using status message filter rules to trigger a Powershell script. In this blog post, we’ll be using the new SCCM External Notification feature to trigger an event in Microsoft Team to notify a channel that a Task Sequence deployment is complete. Besides Teams, you can also use the Office O365 connector to send an email. For this blog post, we’ll stick to the Teams option as I find … END_OF_DOCUMENT_TOKEN_TO_BE_REPLACED 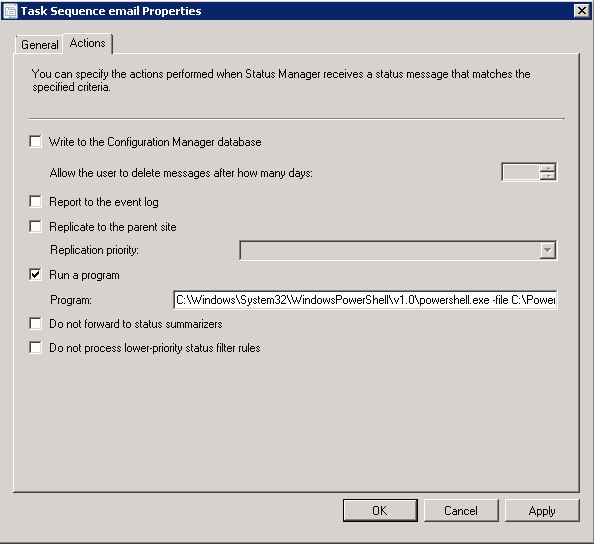 When deploying an operating system with SCCM / MEMCM, monitoring your deployment is crucial. You can use reports in a more dynamic way. Imagine receiving an email saying “Hey your deployment is complete. The computer can be delivered to the client”. SCCM can send an email based on a specific status message generated by the site server. And this is exactly what will be done in this blog post. SCCM records everything action in Status Messages. You are probably familiar with the tons server logs files but SCCM also records everything on the site server itself. A quick look at the Status message shows that there’s tons of available information. Status Message In the SCCM Console Go to Monitoring / System Status / Status Message Queries / All Status Message Status Message shows all actions, there’s lots of valuable information in there Yeah great !… now what? Using the power … END_OF_DOCUMENT_TOKEN_TO_BE_REPLACED 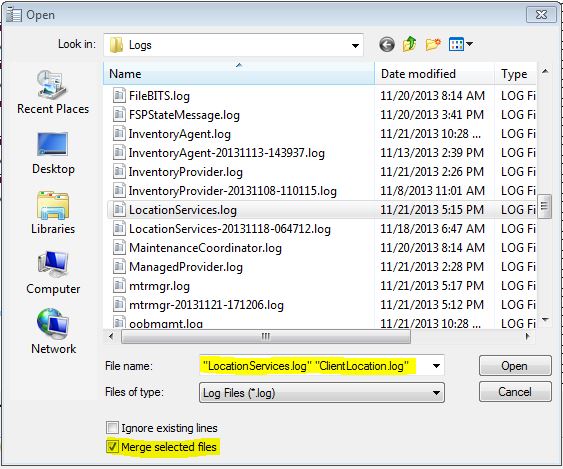 If you’re new to the SCCM world, you have to know that SCCM comes with a log viewer. CMTrace is the tool you need to use to read any SCCM log files. We still meet lots of SCCM admins that don’t know some basic CMTrace features. We’ll show you a couple of SCCM CMTrace tips to improve your skills. In SCCM, client and site server components record process information in individual log files. You can use the information in these log files to help you troubleshoot issues that might occur. By default, SCCM enables logging for client and server components. For more general information about log files in Configuration Manager, see About log files. This article includes information on the tools to use, how to configure the logs, and where to find them. SCCM CMTrace tips #1 The first tip we want to share is the Error Lookup feature. Built-in CMTrace, you … END_OF_DOCUMENT_TOKEN_TO_BE_REPLACED

Since SCCM 1706, you can run and deploy Powershell scripts from the SCCM console basically in real-time. From the SCCM console, you can: edit your scripts, import existing scripts, approved or deny scripts, run scripts on specific collections and examine scripts results. This can be useful to run a script quickly without the burden of creating a package or an application. Unlike standard deployments, when you deploy scripts, they are run almost immediately using Client Operations. Before SCCM 2006, the SCCM Script needs to be enabled in the optional features. If you are running a later version, it’s enabled by default. If you need to know more about how to use this feature, we have a complete blog post describing that. This blog post will focus on the SCCM Scripts monitoring, the execution statistics and output. We’ll describe how you can effectively monitor who in your organization is creating, approving and … END_OF_DOCUMENT_TOKEN_TO_BE_REPLACED